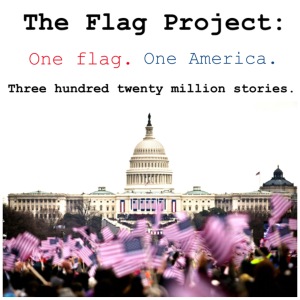 The Flag Project, aware that the American Flag is as much a singular icon unto itself as it is a symbol of three hundred twenty million individual voices, is dedicated to shifting the discourse of, by, and about America.

The most popular story from MOMENTITIOUSNESS has been read, consumed, referenced, or heard tens of thousands of times around the world. From America to South Africa to Iraq to Russia, to China, to Europe, the story has touched a sentimental and intellectual nerve among its fans. We will continue to promote the story and its message as a symbol, an ideal, and a source of hope that the discourse around the American flag is fluid, powerful, and myriad.

Building upon the momentum from Flag, The Story, we will produce a short film to make the Short Film Circuit and to serve as a living symbol of The Flag Project. FLAG is the story of first love and the ultimate understanding that the American flag—while beautiful unto itself—is a metaphor for many things beyond the red, white, and blue that flies proudly overhead each day. Proceeds from Flag, The Movie will be re-directed to the Flag Project.

We will develop, promote, and maintain TheFlagProject.us website as a collaborative digital meeting-space where members can share stories, images, and conversation related to their experiences as Americans and with the American Flag.

Using the website as a gathering point for varied experience and diverse perspectives, we will cull and collect stories into a book of shorts that follows in the form of MOMENTITIOUSNESS and BLACK KETTLE. Proceeds from Flag, The Book will be re-directed to the Flag Project.

Leveraging The Story, The Movie, The Website, and The Book, we will work to re-shape political and interpersonal discourse within the twin theories of Semiotic Arbitrage and Radical Centrism. Rabidly apolitical, the new discourse will seek to find common ground in a common symbol that embodies a common experience pulled from what might otherwise be fodder for conflict.

With financing seeded by The Movie and The Book, The Flag Project will expand into a fundraising entity that will work with—via collaborative activity and/or direct grants—other civic organizations whose purposes intersect with The New Discourse. Special consideration will be given to philanthropic partners that specialize in Education/Pedagogy, Military Family support, and Immigrant experience. Internally, The Philanthropy will support an initiative of “A flag in every classroom,” along with an accompanying curriculum.